Question.
I’m considering either building a Murphy Moose, or buying a Cessna 185.  I want it for flying in canoes and kayaks to remote locations in North America (last trip was canoeing near the Arctic Ocean).  I’m not yet even a private pilot (but will be by summer).  I want a budget planning estimate of what the operating cost of either of these aircraft are going to cost me, equipped with amphibious floats, for a qualified pilot with low hours.  Can you do that? 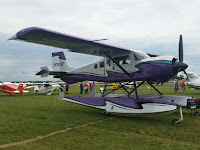 Answer.
Sort of.  I consider the Murphy Moose and the Cessna 185 to be pretty close in operational costs as far as fuel burn, maintenance etc.  A lot will depend on the engine used in the Moose.  Another big difference will be that you will build the Moose and you can do the maintenance if you have the repairman certificate.  The Cessna 185 will need a shop and mechanic to do the repairs.  But the savings you get in maintenance for the Moose will probably be made up in the insurance premiums.  Since it is an experimental aircraft and since it will be on amphibious floats, insurance will be almost impossible or at least very, very expensive.  Not to say the insurance for a low time pilot in a Cessna 185 will be that much lower, it will still be expensive.
I’d look into calculating the average cost to operate a Cessna 185 or maybe even a 206. Contact me for a free sample cost of ownership Excel spread sheet.
I’d also contact a few owners and see what they are saying.  I have been told that the Cessna 185 costs about $130 an hour to operate, not counting the floats.  It would be worth your while to do a little research before you make a decision.
It will also be necessary for you to build up a number of hours as a pilot AND as a seaplane pilot.  The chances for a low time pilot (under 500 total time and 100 seaplane hours) of getting any insurance will be very low.
That might also make the difference in which aircraft you get.  If you build (or build) the aircraft without having to borrow money, insurance might not be required.

On a side note: Murphy Aircraft feels the Moose is probably closer in operation to a Dehaviland Beaver.   Okay, I have to say, that’s a selling point for the Moose right there. Who hasn’t wanted a Dehaviland Beaver?  I may be a Cessna fan but a round engine aircraft on Amphibs…