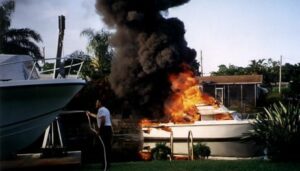 A few Boat Insurance Tips to help you get the best insurance rates (and a few other things to remember):

Need a boat insurance quote don’t forget to call me.

My names on the door!

We are looking for ways to expand the usability of our new Bentley Cruise 200 pontoon.  One thing we wanted was more shade to hide under on those really hot summer Iowa days.  Being a 20 foot ‘toon doesn’t really offer enough space for another full size front mounted bimini (maybe it would, but I also was being cheap and wanted to save a few bucks), so after shopping around for new ideas (umbrellas, Bimini’s, tarps, etc.) I bought a Taylormade Gazebo for the pontoon.

I have a bad habit of not wanting to drill holes in my boats so I started a search for alternate ways to mount the brackets that the gazebo poles fit into.   And what if I want to trade the ‘toon for a bigger and faster ‘toon… then I have to buy the brackets again.  But if I had a clamp system it could just move the gazebo to whatever boat I needed it on.  Don’t worry Jeanne; I am not thinking of trading!

So instead I bought four “quick clamps” from The Bimini Buddy (www.TheBiminibuddy.com). Okay, I could have bought the Bimini Buddy and skipped the Gazebo, but I was trying to cut costs this time around and Overtones (www.overtons.com) had a great deal on the Gazebo. If you haven’t shopped Overton’s they have great prices, quick service and free shipping!
I bought four “Quick Clamps” from The Bimini Buddy and used them for the install.  I may have to buy a few more, these clamps are great. They are designed to fit over the 1 ¼ railing and tighten with a flip of the lever.  They are a very cool clamp, good quality and fast shipping.

Anyway, I spent Sunday afternoon working on different attachment methods for the fittings to the clamps. After three or four trips to the hardware store, I finally ended up installing them in the simplest way possible by just screwing the bracket directly to the quick clamp. Duh!

Should have tried that first and saved me all the time, but if you have ever tried to make a special bracket, you know you have to go through the difficult trial and error process and exhaust a few ideas before the easy solution shows up.

Now I need some time and good weather to install the clamps and Taylormade Gazebo and see if it all works as advertised. If so, I will have shade for the front of the ‘toon, for less than 200 bucks. That is a pretty good deal.