EAA AVIATION CENTER, OSHKOSH, Wisconsin — (June 16, 2022) — The UAS4STEM competition for high school students is back for the second year at EAA AirVenture Oshkosh 2022. The Academy of Model Aeronautics event is for groups of students, ages from 11-17, who build an unmanned aircraft system (UAS) and compete against other teams to complete a specific mission through different obstacles.

“The competition allows kids to have the opportunity to create innovative technology while also developing valuable life lessons within the workforce,” said Kyle Jaracz, AMA’s Education Director. “It is always exciting to see what the kids envision and how they work as a team to develop and compete with an unmanned aircraft system.”

Teams that are competing at EAA AirVenture Oshkosh 2022 include:

The competition will take place on July 28-29 near the southwest corner of Camp Scholler. The top teams from the national level will be recognized during Friday’s afternoon air show. Teams in first, second and third place will receive Skydio products and scholarship awards funded by the AMA Foundation and Skydio.

UAS4STEM is a competition that allows kids to see different career opportunities in the UAS and aviation industries. UAS4STEM is a program of the Academy of Model Aeronautics. For additional information visit uas4stem.org

About EAA AirVenture Oshkosh
EAA AirVenture Oshkosh is “The World’s Greatest Aviation Celebration” and EAA’s membership convention. Additional information, including advance ticket and camping purchase, is available at www.EAA.org/airventure. For more information on EAA and its programs, call 800-JOIN-EAA (800-564-6322) or visit www.EAA.org. Immediate news is available at www.twitter.com/EAA.

WASHINGTON — The U.S. Department of Transportation’s Federal Aviation Administration (FAA) today announced final Drone Rules for Unmanned Aircraft (UA), commonly known as drones. The new rules will require Remote Identification (Remote ID) of drones and allow operators of small drones to fly over people and at night under certain conditions. These rules come at a time when drones represent the fastest-growing segment in the entire transportation sector – with currently over 1.7 million drone registrations and 203,000 FAA-certificated remote pilots.

Remote ID will help mitigate risks associated with expanded drone operations, such as flights over people and at night, and both rules support technological and operational innovation and advancements.

Remote ID (PDF) is a major step toward the full integration of drones into the national airspace system. Remote ID provides identification of drones in flight as well as the location of their control stations, providing crucial information to our national security agencies and law enforcement partners, and other officials charged with ensuring public safety. Airspace awareness reduces the risk of drone interference with other aircraft and people and property on the ground.

Equipping drones with Remote ID technology builds on previous steps taken by the FAA and the drone industry to integrate operations safely into the national airspace system. Part 107 of the federal aviation regulations currently prohibits covered drone operations over people and at night unless the operator obtains a waiver from the FAA. The new FAA regulations jointly provide increased flexibility to conduct certain small UAS without obtaining waiver.

“The new rules make way for the further integration of drones into our airspace by addressing safety and security concerns,” said FAA Administrator Steve Dickson. “They get us closer to the day when we will more routinely see drone operations such as the delivery of packages.”

The Remote ID rule (PDF) applies to all operators of drones that require FAA registration. There are three ways to comply with the operational requirements:

1. Operate a standard Remote ID drone that broadcasts identification and location information of the drone and control station;

2. Operate a drone with a Remote ID broadcast module (may be a separate device attached to the drone), which broadcasts identification, location, and take-off information; or

3. Operate a drone without Remote ID but at specific FAA-recognized identification areas.

The Operations Over People and at Night rule (PDF) applies to Part 107 operators. The ability to fly over people and moving vehicles varies depending on the level of risk a small drone operation presents to people on the ground. Operations are permitted based on four categories, which can be found in the executive summary (PDF) accompanying the rule. Additionally, this rule allows for operations at night under certain conditions.

The final rule requires that small drone operators have their remote pilot certificate and identification in their physical possession when operating, ready to present to authorities if needed. This rule also expands the class of authorities who may request these forms from a remote pilot. The final rule replaces the requirement to complete a recurrent test every 24 calendar months with the requirement to complete updated recurrent training that includes operating at night in identified subject areas.

For general inquiries on these new regulations and other UAS inquiries, please call 844-FLY-MY-UA or email the FAA.

The Innovation Showcase at EAA AirVenture is focused on research and development in the aviation and aerospace industries. It welcomes cutting-edge companies that seek to bring their new products to the public and the aviation marketplace.
“Opener has an unparalleled leadership position in new technology driving personal flight,” said Dave Chaimson, EAA’s vice president of business development and membership. “They have been a part of the Innovation Showcase at EAA AirVenture Oshkosh for the past two years and have been a prime example of the innovative aviation technology we’ve been introducing at AirVenture. Having them as the presenting sponsor of this area will bring even more companies to Oshkosh who are interested in highlighting the newest and best in aviation.”

Opener spent the last 10 years in stealth mode, designing, developing, and testing new innovative technologies, which have now evolved into an all-electric, vertical takeoff-and-landing vehicle, BlackFly. Opener made its public debut in July 2018, shortly before displaying BlackFly at Oshkosh that year. A BlackFly v2 is now on display in the EAA Aviation Museum in Oshkosh.
“EAA AirVenture has always been synonymous with what’s new and game-changing in aviation,” said Ben Diachun, Opener’s president. “Seeing how attendees at Oshkosh welcome and encourage new ideas in all areas of flight convinced us that we needed to help foster it even further by sponsoring EAA’s Innovation Showcase.”
Only 20 exhibitors are selected from all applicants to be included in the Innovation Showcase. Any aviation-related product or service that demonstrates unique, forward-looking technology is invited to apply for complimentary exhibit space in that area. In 2019, nearly 75 companies applied for this area at Oshkosh. Applications for 2020 are currently being accepted through April 1, 2020, through the EAA.org/Innovation website. 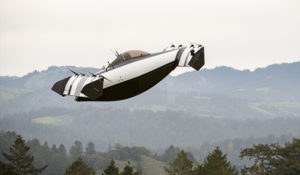